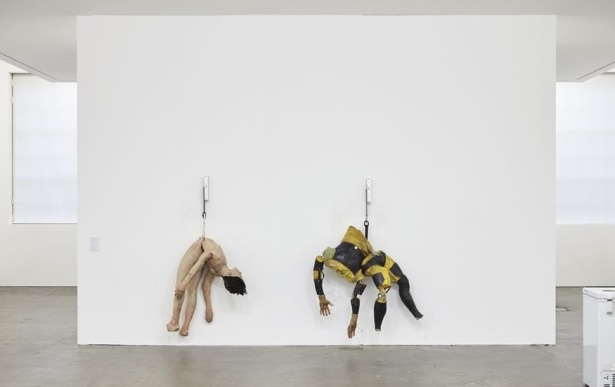 The Birmingham weather beating its seasonal tattoo upon the roof of the Ikon provides a soundtrack of no small irony as, accompanied by the spirit of Antonin Artaud and my six-year-old Son and with a handmade poster declaiming human BSE as a conversational topic-starter, we are politely informed of the explicit content beyond. We take heed of this caution and, indeed, there are penises to behold, though their depictions are merely cartoonish, and not quite as explicit to stir Artaud’s spirit. I mention to him that there is more than a hint of Ballard to this exhibition and so, discouraged to venture any further and already perceiving that the fare on offer is not nearly as cruel or absurd enough for him, he decides to wait outside. Had I also mentioned to him that the questionable imagery was to be found on paintings made of brain matter, I muse, perhaps his enthusiasm would not has dissipated so rapidly.
I feel wholly justified in invoking Artaud’s ghost for this occasion for, if not in the individual works themselves, then certainly within Roger Hiorns’ modus operandi does the late playwright also haunt. One only has to listen to Hiorns enthuse about the body – its fragility, its impermanence, its bloody-minded capacity to survive – to hear echoes of Artaud’s oft-repeated rant:

We guard ourselves constantly from the dangers of the world; we distrust its total indifference to our perpetuity, and yet in doing so we inevitably surrender ourselves to those elements which we fail to perceive. This has been at the heart of Hiorns’ output for a number of years now, and accordingly this new exhibition feels like a retrospective in all but name.
Once more, Ikon have selected a body (pun only slightly intended) of work which sits somewhere fashionably in the middle of concept and delivery and which plays on the gallery’s layout sparingly, yet with the feeling of contrivance. As though Hiorns himself vacillated between “too much” and “too little,” decided upon the former only to pad the remaining space out needlessly with work of spurious kinship to the rest; invention sits uneasily amongst a number of nigh-on unnecessary works. Already there is a confusion of materials: on the one hand, Hiorns has clearly handed the lion’s share of his most recent, untitled, exhibition over to the body, hence the piqued interest of Artaud’s discorporated spirit. Simultaneously, however, the artist’s obsession with jet engines refuses to give way to the dominant theme. There are the powdered remains of such an engine, like a wild card set into an oblong on the floor and incongruous with the anatomical thread herein. Like a joke that one cannot bring oneself to stop telling, Hiorns has been displaying this piece for at least three years already, and perhaps should now let go.
This is not to suggest that the work as a whole is in any way old hat. There are some profound sparks on offer throughout the first floor, such as the weighted stunt dummies which hang in a Damoclean manner from the main wall (one of which, Hiorns ensures us, contains a copy of Martin Heidegger’s Being and Time, although we have only his word on this) and the aforementioned Ballard-esque humanoid forms. Had the late HR Geiger (who famously trod more heavily upon the realm of the phallic) extended his vision of the biological incorporating the mechanical to include the machinery readily available to all, rather than relying on an idea which was uniformly one of science fiction, his output may well have resembled the technologically-transmorphic “bodies” hung (inferred symbolically) from Ikon’s ceiling. All historical and literary allusions aside, the key issue here is that Hiorns is becoming an artist with the depth and scope to fill Tate Modern’s colossal Turbine Hall, yet still labours to produce sculptural works for a gallery space on a human scale. He wants us not to be a mere audience because these works come alive when we interact with them; they only realise their full meaning when we able-bodied and fully organic creatures walk among them, so that not just our differences to these bastardised figures stand out, but also our similarities. 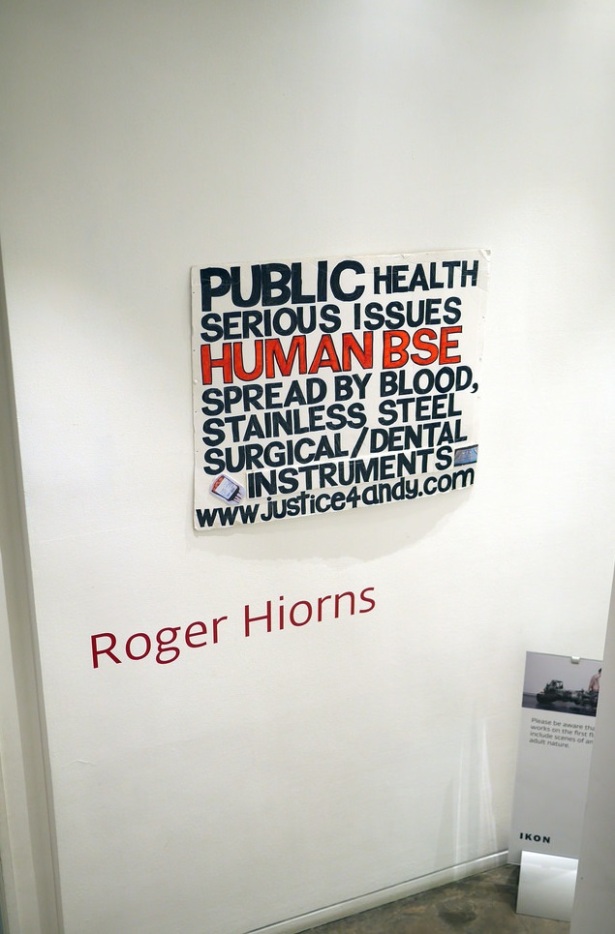 Roger Hiorns has a keen eye for those elements of quotidian contrivances which emulate human nature: thus we encounter assemblages of car parts steadily ejaculating foam – a visual shorthand, one imagines, for the human propensity for talking much, yet saying little. Hiorns, however, is not so cynical. There is hope here for humanity in all its fleshy, febrile organic frailty. We can live, Hiorns says, beyond epidemics, beyond political turmoil and further beyond what our increasingly-delicate climate can burden us with. Perhaps because the individual body still holds sovereignty over yesterday’s dystopian vision of a Brave New World, Hiorns also refers to older work addressing the issue of vCJD and, more broadly, the body’s susceptibility to micro-organic attack.
His sculptural work alludes more to the failing of the human body than it does to human failings, as one can intuit when passing from one room containing these aforementioned hybridised marionettes into another with an upended (and presumably defunct) X-ray machine. Topical, in an age of endless NHS cutbacks, the piece retains a dry wit of its own: the dead machinery left to rot as the patients it once assisted back to health suffer a similar fate.

“There is nothing more useless than an organ!” cries Artaud’s mad ghost from the courtyard below and I – taking my Son by the hand and re-joining him outside– am compelled to agree.